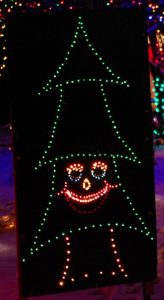 For the 2010 season ,we wanted to add a little more whimsy into the display, so we decided to add an animated figure. Having seen other videos of displays across the country use lots of Santas, reindeer, and elves for this purpose, we wanted to do something different, so we settled on a singing tree. Also, just to add a little more fun, he can not only sing, but “dance” by wiggling his upper body. He is able to move his mouth to sing, and blink his eyes.

The tree was somewhat of a last-minute addition to the display for 2010, being designed and built in late October of that year. Believe it or not he’s actually made out of an old campaign sign of corogated plastic (“coro”). Our candidate didn’t win, but at least we got this cool display item out of it! Being a last-minute addition, we were in a hurry building him and I didn’t take any construction photos. Basically, the coro sign was primed on both sides to cover the original campaign sign, then painted flat back on the front. The tree pattern was sketched out on the back, and then careful math was done to allocate the bulb spacing – in order to keep the number of lights per channel in multiples of standard 20, 35 or 50-light strings. Then holes were poked through the coro with an awl at each bulb location, and the lights pushed through the back to create an effect not unlike a “Light Bright” toy.
In addition to the lights you see in the pictures here, there are lights for an “eyes 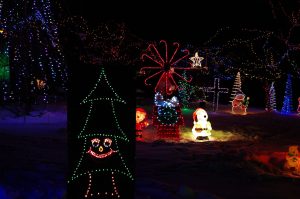 closed” position, a “mouth open” position, as well as the upper tree body leaning left and right. With the tree face and base outlines being on separate channels, this means a total of nine computer-controlled circuits are used to animate the tree to the music. So what makes him come to life? The computer, and a lot of tedious, hand-sequencing of the mouth, eye, and body movements.

Unfortunately, the 2010 season was a hard one for our display weather-wise. We had put the new singing tree up close to the street in the display so he’d be visible. We had him at ground level so as to not block too much of the display behind, and besides, what kind of tree floats? But nature had its way, and we had over 3′ snow drifts in parts of the display, and the city piled 4′ of snow directly in front of our entire display, including the tree. We did our best to make him visible, but he was pretty hidden. So for 2011, we moved him further back in the display, and raised him up a few feet. Hopefully he’ll stand up to snow a bit better after this!

The video linked below shows the first test of the singing tree, made on the night in October, 2010 that he was finished. In this test video he sings “I’ve Got A Feeling” by the Black Eyed Peas. Before anyone asks – no, we don’t use this song in the display (we use all Christmas music), but it was a fun song to do for a quick test. It gives you the idea of what the tree is capable of in terms of singing and dancing.

For the 2017 season we redid all the lights on the tree with LEDs. The original lights held up pretty well, but some parts, especially the face, were fading and the LEDs give it a lot more warmth and brightness. 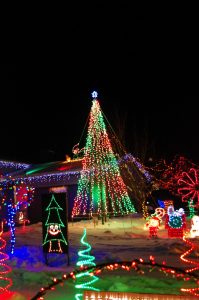