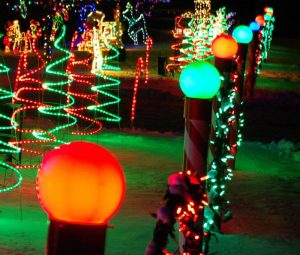 Our “North Poles”, along with our arch fence and mini-trees, make up the “front line” of our display. We have 14 of the poles which allows one pole on either side of our 12 arches (split by the driveway). Each pole can be individually set by the computer to just about any color imaginable. These poles also help elevate our arch fence over potential deep snowfall that might occur during the season. Read on for a bit of a tale on how they were created…

Sometimes several different things come together at just the right time and ends up with a new, unique element in our display. Such was the case with our North Poles, which were added to the display for the 2011 season.

The first factor was the weather during the 2010 season. To put it short, it was miserable. You might remember it as the season that collapsed the Metrodome roof, and it just kept coming, and

coming, and coming. By mid, December, we had drifts over three feet high in many places in the yard, and the city had piled over 4 feet of snow from the street across our entire frontage. Needless to say, much of our display, including virtually all of our arch fence, which was less than 3′ high at the very tops of the arches, was all but lost to viewers out on the street. The previous couple of years weren’t nearly as bad, but still had snows that cause the arches to be at least partially obscured. It was clear something needed to be changed.

The second factor was that a few friends Tim knows through the online decorating community had come up with a concept called a “North Pole”. Basically it was a PVC pipe painted with a candy-cane stripe, a low-wattage light bulb on top, and a white globe over the bulb to make it look nice. Tim realized that perhaps these could be placed between all of our arches to not only enhance the look of the front of the display, but actually be used to raise up the arches over any potential snow.

Finally, at a lighting gathering in Chicago over Labor Day weekend 2010, Tim was introduced to decorating element called the “CoroStar”. The element itself, being about a

foot tall and completely open at the top, is not at all practical for our snowy Minnesota climate. But what these elements did have was relatively cheap RGB strips inside (meaning they can be set to virtually any color), one relatively cheap DMX module per star (meaning each individual star can be individually controlled via the DMX lighting protocol and the sequencing software we use to control the whole display), and a method for chaining them all together and mixing both the power and signal across a simple Ethernet cable.

So in the end, our North Poles 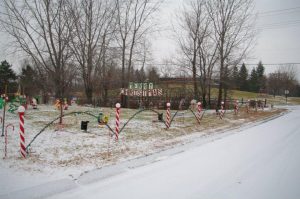 became a marriage of these three ideas/needs. We took the basic North Pole idea, replaced the incandescent light bulb with the RGB LED modules and DMX controller as in the CoroStars, and added the capability for it to support our arch fence. By default, the bottom of the arches are raised up about 8 inches above ground level (whereas they used to be right at ground level). If deeper snow has fallen or is anticipated, we can relatively easily raise the arches to about double that height off the ground, which puts the top of the arches just a bit taller than the tops of the North Poles themselves. Hopefully we won’t need to use that feature, but if so, it will be a lot better than losing the entire fence behind a wall of snow once again. As of the 2021 season, we’ve never raised the arches to the higher level, but just having them raised the basic level has dramatically helped them stay visible over the past 11 seasons.

Here are some miscellaneous pictures from construction and depoloyment:

Are you iterested in all sorts of geeky detail? Tim created this YouTube video early on in the design process for the North Poles, after creating a single-pole “proof of concept”. The video was intended to share with the online “lighting community” for feedback rather than the general public, so lots of terminology, names, and references are thrown out that might not be understood. But you can get a glimpse of how these work “behind the scenes”