Flag Net Light in our 2001 display

Originally Tim was thinking of creating some sort of animated display which included a flag and the text “God Bless the USA”.  However, these plans fell through due to time and budget constraints.  However, we had seen a picture online of an American Flag made out of a 4×6′ net light.

As luck would have it, we had purchased a clear 4×6′ net light after Christmas the previous year.  So we bought a set of red and blue lights, and the two of us switched out the appropriate bulbs to create the flag pattern.  Even though it’s not 100% accurate (hint: count the stripes on the flag), it looks nice, and only cost us about $6 and an hour’s worth of time to create.

The picture below is a close-up of the flag net light, but it seems more like just a series of dots: 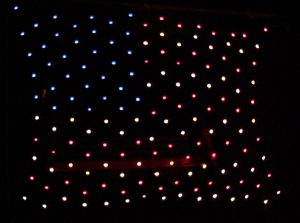 This flag was used through the 2006 season, and it was really beginning to show its age.  We wanted to keep the flag as a part of our display, so we retired it and created the new LED Flag.