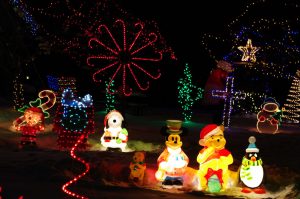 During the 2011 season, we saw a few displays on the internet do a “candy cane pinwheel”. We really liked the concept, so we decided to add one to our 2012 display. We came up with a design that would work well with our needs: basically, the pinwheel needed to collapse down for storage, be easy to set up, and withstand wind and weather. 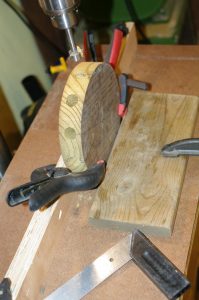 Unlike other designs we had seen which had all the canes permanently attached to a large frame, what we decided to do is use a central hub, with the canes able to be attached to the hub, but also be removed for storage. Tim started out by cutting out a circle out of some pressure-treated 2×10 lumber scrap we had on hand. He then set up a jig so that holes could be drilled out around the circle on the drill press.

The next step was to cut PVC pipe to short lengths which could then be pounded into the holes (which were sized appropriately to accept the PVC snugly). As you can see in the second picture below, the back of the PVC is slotted partway down. More on that in a bit. 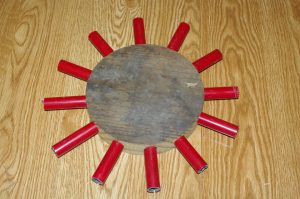 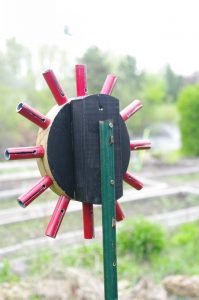 To set up the item, all you need do is slide the pre-lit candy canes over the PVC pegs. The wires for the canes go out the slots/holes. We built a custom wiring harness which carries the power for all 12 canes (individually) down to the controller lower on the green stake. 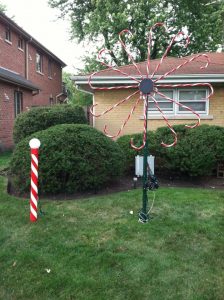 For a test-drive, we brought this display to the Chicago C3 lighting conference held over Labor Day Weekend. We were able to set up the display in about 15 minutes, proving that we had a workable design. We did decide to beef up to a larger fence post to hold it up in our display, but other than that, it worked wonderfully and was well received among fellow decorators. The picture to the right shows the pinwheel set up in Chicago: 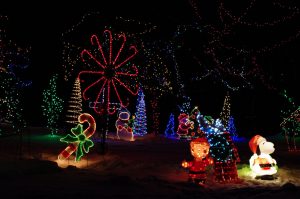 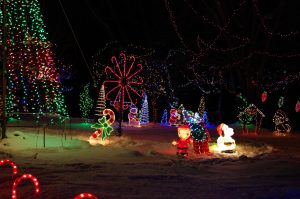 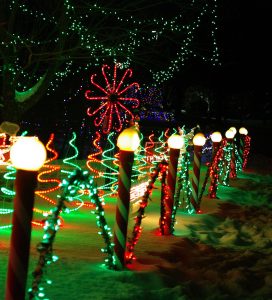